Our parent nonprofit, Partners of Larimer County, receives lots of questions and feedback about cannabis use and driving, including: How high is too high to drive? Research shows that teens and young adults mostly do not perceive driving high to be as dangerous as driving drunk. However, recent studies and traffic fatality data show otherwise.

Impaired is impaired. Driving high can get you a DUI, just as driving drunk can. A BAC (Blood Alcohol Content) reading of 0.08 is the legal limit to drive in Colorado, although you can still get a DUI with a lower BAC if you show visible signs of impairment. So, when it comes to cannabis, how high is too high? 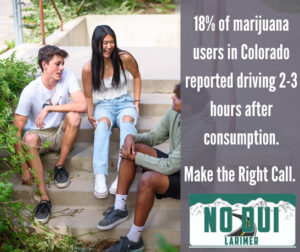 How high do I have to be to get a DUI for marijuana use in Colorado?

According to CDOT (Colorado Department of Transportation), “In Colorado, the main factor leading to a DUI arrest is the enforcement officer’s observation of impairment by the vehicle operator. If the officer determines that the driver’s ability to drive is impaired by alcohol and/or drugs [including cannabis] to the slightest degree, then an arrest can be made. One or more of the following specific factors can lead to an arrest:

Does marijuana actually affect my driving?

Yes. In fact, a recent study showed differences in driving scores between sober drivers and those who had consumed marijuana even 3.5 hours post-consumption (Source: “Driving Performance and Cannabis Users’ Perception of Safety”) This is alarming, because, in the course of our work, we often hear statements from young people like, “Being high doesn’t affect my driving,” or, “I drive better when I’m high.”

How does marijuana impair driving?

What happens if I get a DUI for marijuana-impaired driving?

The same DUI laws apply for marijuana as they do for alcohol, any other impairing substances, and any combination of substances. Fines range from $200-1,500 but can include other financial penalties and court costs. The average cost of a DUI in Colorado is $13,530.

As a safety-oriented organization, our greater concern is the risk of injury and even loss of life due to marijuana-impaired driving. We know that:

As an impaired driving organization, we do not expect that teens and young adults will avoid marijuana or alcohol completely. Our goal is that as long as people are consuming alcohol, marijuana, and other drugs, they do so responsibly.

Be the Spark of Hope for local youth * Donate to our Spark Campaign!